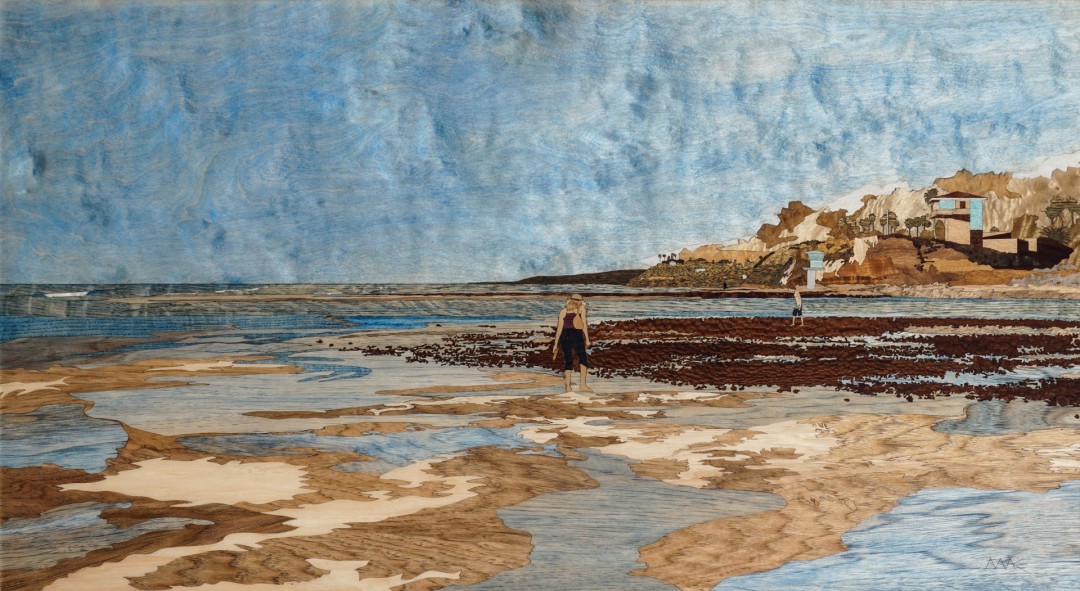 "Cardiff by the Wooden Sea" 2 of 6 Second Place

This is an original marquetry wood inlay depiction of Cardiff California on a low tide looking north to Dana Point . This piece is #2 of 6 original artworks created simultaneously from different woods. Employed in the production of this work are veneer from multiple species of trees either individually stained with tinted shellac or left in natural wood tones, cut piece by piece and painstakingly assembled and laminated to a 3/4” MDF substrate before being varnished under three coats of UV-inhibiting Artresin’. The piece is signed in the wood, veneered on the edges and comes with nice sturdy flush-mount French Cleat hanging hardware. All sides of this piece are sealed..

Mac Hillenbrand is the founder of the infamous underground artspace warehouse rock club and speakeasy The French Fry Factory (03’-05’ Oakland.) He is the leader of his own surf gang The Coalition for Shralping and a former resident of Baja’s East Cape. He is Disk Jockey Old Spice the vinyl only northern soul and oldies dj. A solo through hiker of the John Muir Trail and the owner of the marquetry art business Amber Waves of Grain, he holds a C-33 painting contractor’s licensing and lives, works and surfs in San Diego. Above all, he is working to be the first person to use marquetry wood veneering techniques specifically to explore the aesthetic organic parallels between wood grain characteristics and oceanic textures.

-Certificates in Boulle Marquetry, Piece by Piece and Painting in Wood, The American School of French Marquetry, San Diego (2014)

-B.A., Film and Digital Media with an Emphasis in Production, The University of California at Santa Cruz (2002)

International Design in Wood Competition at the Del Mar Fair

International Design in Wood Competition at the Del Mar Fair